Without thinking too much about it in specific terms, I was showing the America I knew and observed to others who might not have noticed.
—Norman Rockwell 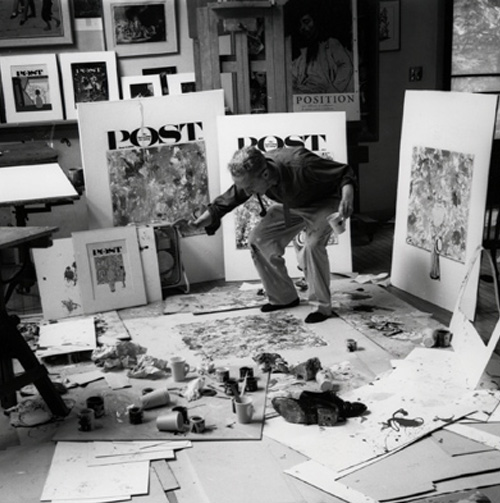 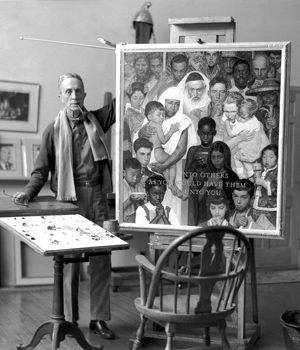 At age 21, Rockwell’s family moved to New Rochelle, New York, a community whose residents included such famous illustrators as J.C. and Frank Leyendecker and Howard Chandler Christy. There, Rockwell set up a studio with the cartoonist Clyde Forsythe and produced work for such magazines as Life, Literary Digest, and Country Gentleman. In 1916, the 22-year-old Rockwell painted his first cover for The Saturday Evening Post, the magazine considered by Rockwell to be the “greatest show window in America.” Over the next 47 years, another 321 Rockwell covers would appear on the cover of the Post. Also in 1916, Rockwell married Irene O’Connor; they divorced in 1930.

The 1930s and 1940s are generally considered to be the most fruitful decades of Rockwell’s career. In 1930 he married Mary Barstow, a schoolteacher, and the couple had three sons, Jarvis, Thomas, and Peter. The family moved to Arlington, Vermont, in 1939, and Rockwell’s work began to reflect small-town American life. 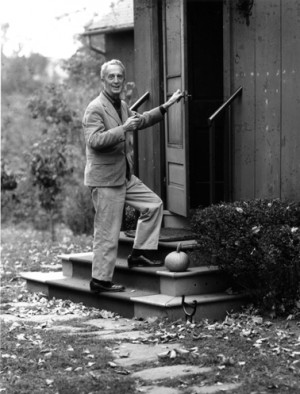 In 1943, inspired by President Franklin Roosevelt’s address to Congress, Rockwell painted the Four Freedoms paintings. They were reproduced in four consecutive issues of The Saturday Evening Post with essays by contemporary writers. Rockwell’s interpretations ofFreedom of Speech, Freedom to Worship, Freedom from Want, and Freedom from Fear proved to be enormously popular. The works toured the United States in an exhibition that was jointly sponsored by the Post and the U.S. Treasury Department and, through the sale of war bonds, raised more than $130 million for the war effort. 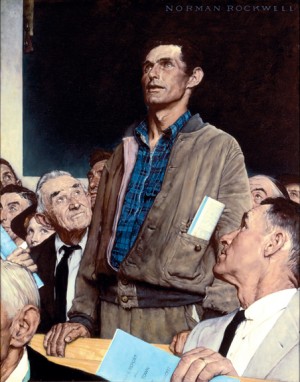 Norman Rockwell (1894-1978), Freedom of Speech, 1943. Illustration for The Saturday Evening Post, February 20, 1943. From the collection of Norman Rockwell Museum. © 1943 SEPS: Licensed by Curtis Licensing, Indianapolis, IN. All rights reserved. 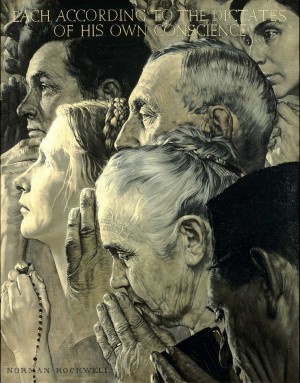 Norman Rockwell (1894-1978), Freedom of Workship, 1943. Illustration for The Saturday Evening Post, February 27, 1943. From the collection of Norman Rockwell Museum. © 1943 SEPS: Licensed by Curtis Licensing, Indianapolis, IN. All rights reserved. 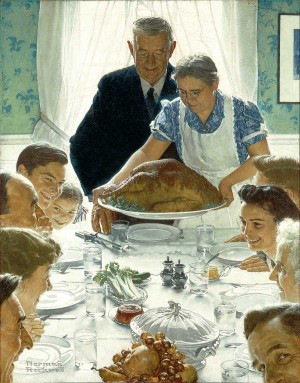 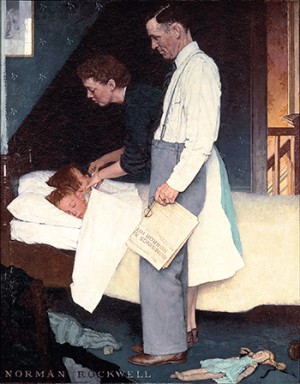 Norman Rockwell (1894-1978), Freedom From Want, 1943. Illustration for The Saturday Evening Post, March, 6, 1943. From the collection of Norman Rockwell Museum. © 1943 SEPS: Licensed by Curtis Licensing, Indianapolis, IN. All rights reserved.

Although the Four Freedoms series was a great success, 1943 also brought Rockwell an enormous loss. A fire destroyed his Arlington studio as well as numerous paintings and his collection of historical costumes and props.

In 1953, the Rockwell family moved from Arlington, Vermont,