Skip to content
Dinotopia: The Fantastical Art of James Gurney 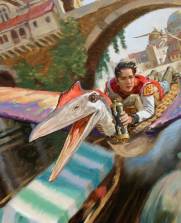 James Gurney’s Dinotopia bring the worlds of science and the imagination to life by chronicling Arthur and Will Denison’s remarkable experiences on a lost island in vibrant color and meticulous detail. Recounted in words and pictures in the best-selling book series, Dinotopia: A Land Apart From Time (1992), Dinotopia: The World Beneath (1995), and Dinotopia: First Flight (1999), the artist’s compelling tale has engaged and enchanted readers by inviting them to explore the far reaches of a mysterious destination. Waterfall City, the island’s center of learning, The Hatchery, birthplace of many of Dinotopia’s prehistoric inhabitants, and The Forbidden Mountains, where dinosaurs dare not venture, are just a few of the places described in Arthur Denison’s fictional journal and in the outstanding works on view.

Inspired by a deep and abiding interest in archaeology, lost civilizations, and the art of illustration, James Gurney invites viewers to enter a fantastical world in which dinosaurs and humans live side-by-side. His luminous paintings, beautifully crafted drawings and hand-made models, which are featured in this exhibition, explore the wonders of the distant past through the lens of the imagination. The artist’s original New York Times bestseller, Dinotopia: A Land Apart from Time, appears in eighteen languages with over two million copies sold. Dinotopia: Journey to Chandara, the next installment in the series, has been released and is now available.