Join this group of talented individuals and contribute your time while gaining exciting educational opportunities and a broad understanding of museum work and Norman Rockwell’s contribution to the field of illustration!

Norman Rockwell Museum offers internships for undergraduate, graduate, and postgraduate students, providing opportunities to acquire educational experience in an art museum that houses the original artwork of Norman Rockwell, one of the nation’s greatest artists. Norman Rockwell’s iconic images, appreciated by audiences from around the world, capture the scope of 20th-century American life.

Internships are unpaid and may be arranged to accommodate any semester throughout the year ranging from six to twelve weeks depending on school requirements and museum needs. Hours vary depending on placement and availability and include evening and weekend hours as necessary. 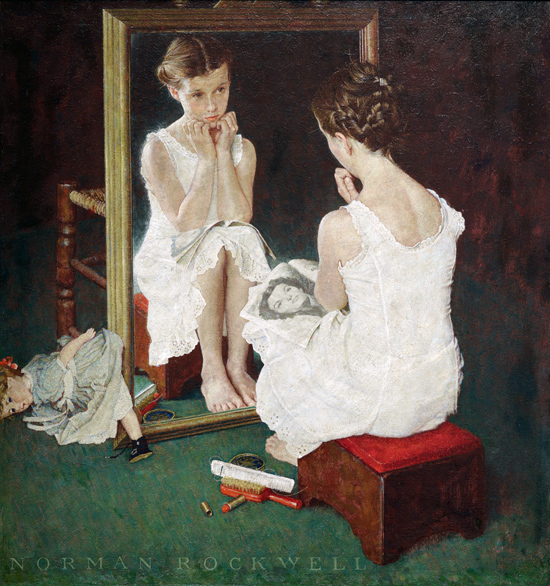 The Rockwell Center for American Visual Studies offers a named, paid internship in honor of illustration historian, gallery owner, and author Walt Reed in recognition of Mr. Reed’s lifelong commitment to scholarship relating to the art of illustration. This internship provides a unique opportunity for third and fourth year college and graduate level students interested in pursuing arts and museum careers to gain practical experience within a nationally accredited organization dedicated to the art of illustration in all its variety.

The intern will spend eight to ten weeks focusing on a project or projects established within the Curatorial/Exhibitions Department. The internship requires at least a four-day-a-week commitment including occasional weekend days.

The intern will receive a stipend of $2,500 in support of their work.

Walt Reed (1917-2015) was the world’s foremost scholar and historian of illustration art. Mr. Reed was trained as an illustrator at Pratt Institute in Brooklyn and the Phoenix Art Institute in New York City, and freelanced as a book illustrator prior to joining the instructional staff of the Famous Artists School in Westport, Connecticut. There he worked with some of America’s most prominent illustrators, including Norman Rockwell, Steven Dohanos, Robert Fawcett and Albert Dorne. Reed served as editor for North Light Publications from 1972 to 1976. In 1974, he founded Illustration House, Inc., a gallery specializing in the field of illustration and dedicated to the preservation of this vital form of American art. His many books on the subject of illustration include The Illustrator in America; Harold von Schmidt Draws and Paints the Old West; John Clymer, An Artist’s Rendezvous with the Frontier West; An Artist’s Rendezvous with the Frontier West; Great American Illustrators; The Magic Pen of Joseph Clement Coll; The Art of Tom Lovell—an Invitation to History; and Harvey Dunn: Illustrator and Painter of the Pioneer West. Reed also designed the Bicentennial 50 State Flag stamps for the U.S. Postal Service in 1976 and was a consultant on several subsequent stamp projects.

About The Rockwell Center for American Visual Studies

The Rockwell Center for American Visual Studies at the Norman Rockwell Museum is the nation’s first research institute dedicated to the integrative study of American illustration and its impact in our world. The Rockwell Center’s goal is to enhance and support scholarship relating to this significant art form, exploring the power of published images and their integral role in society, culture, and history, and the world of art―from the emergence of printed mass media in the mid nineteenth century to the innovations of digital media today.

This is an opportunity to learn and work on a wide range of important accounting functions including month-end financial reports, accounts receivable, accounts payable, annual audit and the creation of new reports. Project opportunities include:

Candidates should be business, finance, management or accounting majors. Proficiency in Microsoft Office applications, especially Excel and familiarity with financial databases are helpful. Attention to detail, the ability to multi-task, confidentiality and excellent communication skills are all essential.

Full or part time, an internship for creative and energetic individuals, inspired and motivated to be actively involved in spreading the word about Norman Rockwell and the art of illustration! Seeking self-starters with great initiative, able to work with the team and independently. Meet artists, press, and connect with marketing and museum colleagues and vendors, and regional community. Social media, HTML, Word, Excel, WordPress, and InDesign experience ideal, but not necessary. Internship credit available – and great resume builder. Project opportunities include:

The Digital Engagement Intern will be offered educational opportunities to work on production and research projects with various digital platforms. Projects may include:

Individuals must be self-starters and results oriented with great entrepreneurial spirit with the ability to work on an assortment of projects concurrently either independently or as part of a team.

Candidates should have a strong background in or working toward a degree in computer science and/or digital media production. Working knowledge of HTML5 and JavaScript development, database management, and/or media production and management is strongly recommended.

The Development Office works with individuals, corporations, foundations, and government agencies to support every facet of the Museum. The development internship will provide firsthand experience in institutional giving, an important and high-demand aspect of non-profit fundraising. The intern will learn how to increase charitable contributions by working on various projects and participating in research and fundraising strategies.

Intern projects and learning experiences may include:

Strong interpersonal skills and precise attention to detail are required. Must be computer literate and have knowledge of and ease with Microsoft Office. Must effectively interact with members of the Development staff, as well as other museum departments. Experience conducting online research preferred. Please include a writing sample with your application.

This internship is an excellent opportunity for an undergraduate and graduate student studying Hospitality and Tourism. It includes a variety of activities to best serve the diverse visitation during a busy seasonal operation. This opportunity is available to individuals wishing to contribute their time and abilities to the service of the museum’s visitors, including general visitors, bus tour groups, school groups, visitors with special needs, and others. Interns provide important support for the Norman Rockwell Museum’s staff, volunteers, and visitors. The internship program focuses on valuable hands-on experience, ongoing training sessions, and formal instruction where needed. Learning opportunities include:

Although housing is not available, we may be able to assist in finding affordable housing and part-time employment within the Berkshire community.

College Credit: Interns seeking college credit are responsible for making all arrangements with their institutions prior to their arrival. Norman Rockwell Museum is not able to provide financial compensation.