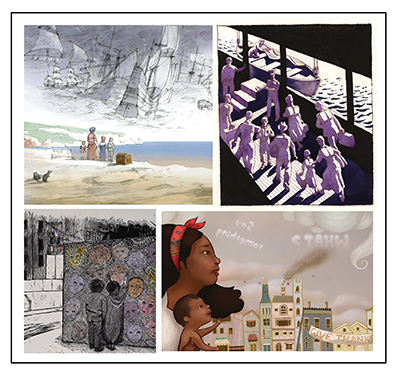 STOCKBRIDGE, MA—Finding Home: Four Artists’ Journeys, a new exhibition at the Norman Rockwell Museum will open Sunday, November 10, 2019 and remain on view through Monday, May 25, 2020. This special exhibition documents the complex emotional realities of adapting to a new life thousands of miles away from where their stories began, through compelling visual memoirs inspired by the personal journeys of four master illustrators, Frances Jetter, David Macaulay, James McMullan, and Yuyi Morales.

More than 200 original drawings, paintings, linoleum block prints, and digital mixed media works by the artists draw upon memories and family narratives, and on historical research that establishes meaningful contexts for their work. Personal mementos from photographs, travel documents, treasured toys, skates, and tea sets, to articles of clothing, books, as well as video commentary, will illuminate each illustrator’s story. The space that images make to inspire conversation will be explored, as will the distinctive qualities of each artist’s voice, their aesthetic and technical approaches, and the use of visual symbols as anchors in their poignant sequential narratives. 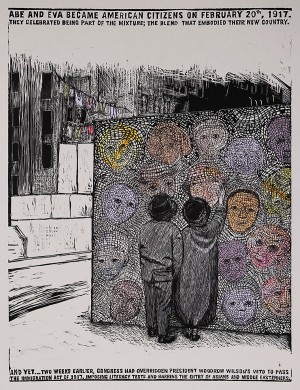 Frances Jetter’s Amalgam is an illustrated history of the life and times of her immigrant labor unionist grandfather, who left Poland in 1911 when it was still part of the Russian Empire. A labor of love, Amalgam has been under construction for almost a decade, and is extraordinary among Jetter’s extensive body of work, which includes prints, artist’s books, and drawings focusing on political and socially-significant subject matter. Her images have illustrated articles in the New York Times, The Washington Post, TIME, The Nation, the Village Voice, The Progressive, and others. Amalgam is a powerful series of large-scale linoleum block prints carved and often re-worked by the artist, incorporating chine-collé overlays and complex accordion foldouts to tell her compelling family story. 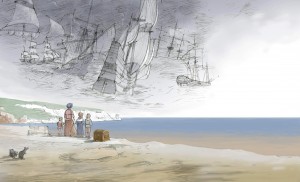 David Macaulay “Ships crossing the Atlantic Oceans were powered by the wind in their sails”, 2017. Illustration for “Crossing on Time: Steam Engines, Fast Ships and a Journey to the New World” by David Macaulay Digital Illustration. Collection of the artist. Image © David Macaulay. All Rights Reserved

Caldecott Award-winning artist David Macaulay  documents both his own family’s immigration story and the state-of-the art ship that made high speed ocean travel possible in his recent book, Crossing on Time: Steam Engines, Fast Ships, and a Journey to a New World. Macaulay brings his signature curiosity, in-depth research, and detailed observations to his own immigration story. The design and construction of the most advanced steamship of its time, the SS United States, and the life of its designer, William Francis Gibbs, are fully explored, framed by Macaulay’s own poignant tale, as he and his family crossed the Atlantic on this marvel of technology and engineering.

Leaving China, a memoir by James McMullan, is inspired by his World War II childhood, and the family’s travels from China to India, Canada, and the United States. Born in Tsingtao, North China, after the war broke out and his father joined the Allied Forces, McMullan and his mother moved from one place to another—Shanghai, San Francisco, Vancouver, Darjeeling—after his father. Those ever-changing years took on the quality of a dream, a feeling that persists in his stunning watercolor paintings, which compliment a text that tells a remarkable story. In addition, several of the artist’s distinctive Lincoln Center theater poster designs, for which he is also known, will be on view. 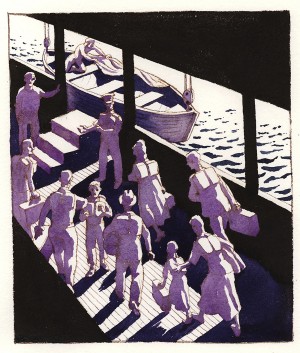 In 1994, author and illustrator Yuyi Morales left her home in Xalapa, Mexico and came to the United States with her infant son, Kelly, leaving behind everything she owned. Dreamers tells the story of her difficult passage―Morales spoke no English at the time, but she found solace and inspiration in an unexpected place, a San Francisco public library. Book by book, she unraveled the language and customs of an unfamiliar new land and found ways to make a home within it. A celebration of what immigrants bring with them when they leave home, Dreamers is topical, timeless, and relevant as that status of immigrants become increasingly uncertain. Children and their families will enjoy spending time in the Dreamers gallery reading nook, where additional illustrated stories of immigration can be enjoyed. 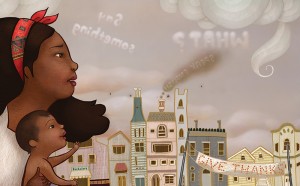 With Finding Home: Four Artists’ Journeys, Norman Rockwell Museum continues its exploration of the immigrant experience, giving voice to immigrants and offering a visual record of a truly American experience.

On Sunday, November 10, join artists Frances Jetter, David Macaulay, and James McMullan, for a special opening brunch and conversation about their work at 11 a.m., tickets and related programming are available online at nrm.org.

For the past eight years the Museum has also partnered with the Berkshire Immigrant Center, Berkshire Community College Adult Learning Program, and the Literacy Network of South Berkshire to host the annual United States Citizenship Naturalization Ceremony and celebrate the regions’ newest citizens.

The Museum’s touring exhibition, Enduring Ideals: Rockwell, Roosevelt and the Four Freedoms, features Norman Rockwell’s iconic paintings illustrating the themes expressed in Franklin Delano Roosevelt’s 1941 speech: Freedom of Speech, Freedom of Worship, Freedom from Want, and Freedom from Fear. Later incorporated into the United Nations post WWII statement of human rights, they have since become the country’s and the UN’s greatest legacies, a testament to the paramount importance of human rights and dignity.