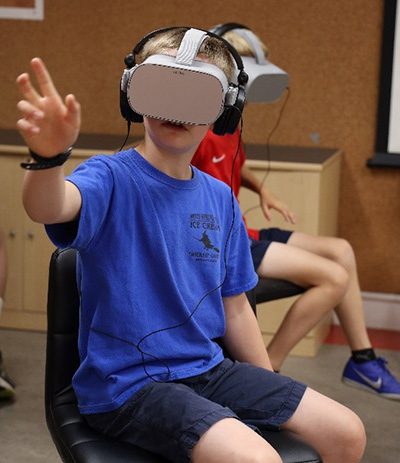 About the Virtual Reality Experience

The traditional museum going experience typically requires people to see paintings on a wall and objects under a glass case. VR turns a passive viewing experience into an interactive activity. “This VR experience is meant to break down some of those boundaries and give people a direct connection to the context by experiencing the content firsthand,” said Rich Bradway, Director of Digital Learning & Engagement. “Visitors of all ages are loving the immersive experience; both kids and grandparents are literally wowed by this new Rockwell opportunity.”

Use of the VR headsets is included with admission and is available on a first-come-first served basis. Appropriate for patrons ages 7 and older.

Freedom from Fear: “Walk” through a 1940’s house on the American home front to discover a sense of time and place and see how whole families supported the war effort.   Tour the kitchen to learn about rationing and Victory Gardens, then turn on the radio in the living room to listen to a program. In the kids’ room, see the dolls and trading cards of the day; examine a school-initiated recycling program encouraging students to recycle materials for the war effort, and check out the Air Craft Spotter’s Handbook to learn how kids were recruited to spot enemy planes.

Freedom from Want: Take a “virtual gallery tour” through the many memes/parodies of Rockwell’s iconic painting of a 1943 family seated around a table for a holiday meal. Browse through new interpretations featuring superheroes, Snoopy, Barbie, the cast of Modern Family, Disney characters, Muppets, video game characters, and more.  Learn how Rockwell’s Four Freedoms supported the War Bond effort and the countrywide tour that raised money for the war. Through these, we see Norman Rockwell’s influence on our culture and society, and how artists have since appropriated his images for contemporary contexts.

Freedom of Worship: Join a virtual guided tour of Norman Rockwell’s Arlington, VT studio to learn about his artistic process and how he created Freedom of Worship, using various models and expressions. Then jump over to his Stockbridge, MA studio to see how Rockwell used his process to research a similar abstract concept and translate it into the Golden Rule.

Freedom of Speech: Explore Town Hall to learn about Rockwell’s real world experience at the annual town meeting. See how his neighbor got up to oppose a school project, expressing his views without interruption or intimidation — serving as the inspiration for the painting. Walk through the Freedom Gallery to listen to excerpts of important speeches from FDR, Churchill, Sojourner Truth, and John F. Kennedy and hear the words they used to inspire civic engagement.

How the Virtual Reality Experience was Developed

Developed in collaboration with the Academy of Art University, San Francisco, approximately 75 students and 40 contributors across the University worked for more than 18 months to ensure the VR experience was ready to travel with the Four Freedoms exhibition. Students also served as actors, recreating excerpts of historical speeches to create a Speeches of Freedom gallery, including Franklin Delano Roosevelt’s (FDR) inaugural speech, Winston Churchill’s speech entitled “Blood, Sweat and Toil”, which marked England’s entrance into the war and Malala’s speech to the Junior United Nations delegation.

“The VR project has been a learning experience through and through. The students that worked on this project at the Academy of Art typically work on fantasy and science fiction type content, and they weren’t initially enthusiastic about working on a Norman Rockwell project,” Bradway explained. “But we converted them and a number of students stuck it out because they saw the power of using technology as a learning tool to talk about history.”