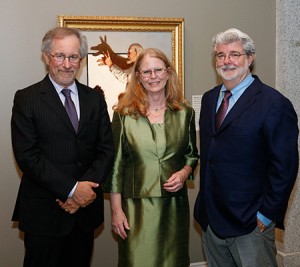 Today seems like a perfect day to honor two modern visual storytellers, who happened to cite Norman Rockwell as an important influence.

Happy Birthday to Norman Rockwell Museum Trustee Emeritus, Steven Spielberg, who turns 69 today. The filmmaker has shown his love of Norman Rockwell’s work by going so far as recreating the artist’s Freedom From Fear for his 1987 film, Empire of the Sun.  Last month, he followed in Rockwell’s footsteps by receiving the Presidential Medal of Freedom, the nation’s highest civilian honor. His latest film, Bridge of Spies opened in October to rave reviews.

Congratulations also to Museum friend, George Lucas, who earlier this month received the prestigious Kennedy Center Honors for his contribution to American culture through the arts. The creator of Star Wars is on everyone’s mind this weekend, as the latest installment of the beloved film series opens today. Norman Rockwell Museum is also excited to hear about his upcoming Lucas Museum of Narrative Art, which will include items from his illustration art collection, featuring a number of original Rockwell paintings.

In 2010, the Smithsonian American Art Museum opened Telling Stories: Norman Rockwell From The Collections of George Lucas and Steven Spielberg, an impressive exhibition of Rockwell works from the collection of both filmmakers.

Congratulations to both of these outstanding artists, who continue to inspire us and keep the tradition of visual storytelling alive. The FORCE is with them both.