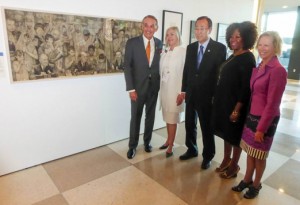 A special reception was held at the United Nations Headquarters on the evening of Monday, June 30, to celebrate the opening of We The Peoples: Norman Rockwell’s United Nations. The exhibition, organized by Norman Rockwell Museum, is on view at the UN’s New York City Visitor Centre, to commemorate the 70th anniversary of the peacekeeping organization.

Speaking during the evening’s opening remarks, United Nations Secretary-General, Ban Ki-moon said that, “We are so honored to now host the original Golden Rule as well as the United Nations drawing for the entire summer of our 70th anniversary year.”

We The Peoples features 33 original artworks created by Norman Rockwell, including United Nations, a 1953 charcoal drawing that the artist created after being inspired by the newly-formed organization’s mission, and visiting the its headquarters for reference (photos are included in the exhibition). Although unfinished, the theme of the artist’s illustration was later incorporated into his iconic 1960 painting, Golden Rule, which is also on view in the exhibition. A large mosaic of the painting has been on view at the UN since 1985, presented as a gift on behalf of the United States by then First Lady Nancy Reagan.

“On any given day at the UN, you will find tourists, delegates and diplomats marveling before (the) beautiful mosaic,” the Secretary-General noted.

“I often walk by and see people as diverse as the painting itself – standing in awe at its moving image of humanity and its message of compassion and community that are at the heart of all world religions.” 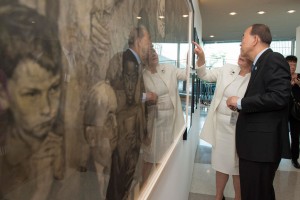 “Civic participation inspired Rockwell and it continues to inspire the museum that bears his name,” noted Norman Rockwell Museum Director/CEO, Laurie Norton Moffatt. “When the United Nations Deputy Secretary-General asked us to be part of this year’s celebration, we could not be more proud and more eager to share Rockwell’s aspirational message to honor the work of the UN to achieve peace, social justice and humanity for all the world’s peoples.”

Deputy Secretary-General Jan Eliasson, who was instrumental in the development of the exhibition, recalled that as an exchange student in America, “My family in Indiana had a subscription to The Saturday Evening Post, and I loved (Rockwell’s) illustrations. I felt that Norman Rockwell was an American legend, an American icon. He was that, but he was also a world citizen. The way he has done The Four Freedoms, the way he has done (The Problem We All Live With), sends a message that he was a man of compassion, a man of solidarity.”

Speaking about Rockwell’s United Nations drawing, which the UN recently rediscovered, Eliasson added that it is “a fantastic image of people waiting for the security council to deliver peace and security. You look at that and see that this man was a man of global citizenship.”

Also offering remarks during the ceremony were Kathy Calvin, President and CEO of the United Nations Foundation, which funded and made the exhibition possible. Ruby Bridges, the inspiration for Rockwell’s civil rights era painting, The Problem We All Live With, was also in attendance and honored.

We The Peoples: Norman Rockwell’s United Nations is on view at the United Nations Visitor Centre through September 15. Admission is free to the general public.