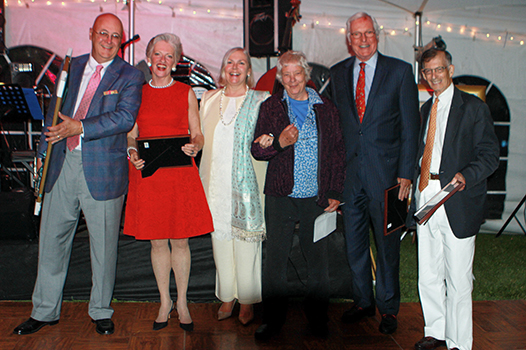 Stockbridge, MA, June 12, 2015—Norman Rockwell Museum honored three of its longtime leaders during a special tribute held during its Summer Gala on Saturday, June 6. The Museum honored Anne H. Morgan, Thomas L. Pulling, and Mark Selkowitz, whose vision and dedication through the years, has helped guide the institution into the digital age.

“Together, these remarkable people have helped grow ‘The Rockwell’ into a museum that is recognized across the globe today,” notes Museum Director/CEO Laurie Norton Moffatt. “All three are true visionaries, hard workers, and consummate fundraisers. Guiding the Museum in new directions, they have helped us broaden our national and international scope, while remaining true to our community roots.”

Mark Selkowitz (MA) is a former affiliate of True North Insurance Agency, Inc. in Pittsfield. In addition to other area arts, social services, and financial institutions, Selkowitz served on the Museum’s Board of Trustees from 1983 to 2011, including time as both Vice President and Clerk. During his affiliation with the Museum, he brought his leadership and fundraising skills to bear, helping to drive development efforts and growth, including the building of its new location on the Linwood Estate.

“Mark has worked tirelessly for this Museum—as an ambassador, a fundraiser, and a steward,” observed Museum President Emerita, Lila Berle. “He reflects the civic leadership Norman Rockwell so greatly admired in Americans and portrayed in his paintings. All of us are deeply appreciative of Mark for his long service and dedication.”

Anne H. Morgan (GA & NC) is former Executive Director of the Ovarian Cancer Institute, and previously served as Director of Development for Emory University and as Director of External Affairs at the High Museum of Art. A child model for Norman Rockwell, she posed for the 1957 “Saturday Evening Post” cover, “The Checkup;” and Crest advertisement, “Look, Mom—no cavities!” Morgan reconnected with the artist’s work during the Museum’s first traveling exhibition, “Pictures for the American People,” which opened at the High Museum in 1999. She joined the Norman Rockwell Museum Board of Trustees shortly thereafter, serving as Board Development Chair, and later as President and Chairman.

Ms. Norton Moffatt adds: “Anne led us through major fundraising efforts to digitize our collections and re-brand the Museum as the nation’s resource on Norman Rockwell and American illustration art. Her good humor and strong leadership have steered us through the frothy seas of a global recession, charting a steady course for the future. We are deeply grateful for her continued devotion and service to this Museum.”

Thomas L. Pulling (NY & FL) retired as Managing Director of Citigroup in 2006 after 30 years of service. A longtime friend of the Museum with a deep personal appreciation of the field of illustration, Pulling served as the Chairman of its Board of Trustees from 2010 to 2013, and was a founding member of the Museum’s National Council. In addition to tenures with the Board of Long Island University and Woodlawn Cemetery, he serves as a Director on the Board of the Henry Luce Foundation—a major contributor to transformative projects for Norman Rockwell Museum, including ProjectNORMAN and the “American Chronicles: The Art of Norman Rockwell” catalogue. Several years ago, Pulling and his son Teddy donated their pristine collection of World War One illustrated posters to the Museum.

Ms. Berle notes: “Tom now serves as Trustee Emeritus introducing us to valuable contacts across the country. We appreciate his warmth, wisdom, and vision and are indebted to him for his great generosity and devotion to this Museum.”

Awards were presented to the three honorees during the Museum’s sold-out Summer Gala, which raised over $145,000. The evening also served as an opening for its newest exhibition, “Roz Chast: Cartoon Memoirs,” with Ms. Chast in attendance. The exhibition is on view at the Museum through October 26, 2015.