Stockbridge, MA, May 22, 2015— Beyond the legendary status that he had achieved during his lifetime, artist Norman Rockwell (1894-1978) was a masterful visual communicator with a deeply held belief in the imperative of peace, prosperity and basic human rights for all the people of the world. His compassionate images of family, community, and the challenging issues facing a rapidly changing world became a defining national influence, reaching viewers by the millions in the most popular periodicals of his day.

In 1952, at the height of the Cold War and two years into the Korean War, Rockwell conceived an image of the United Nations as the world’s hope for the future. His appreciation for the newly formed organization and its mission inspired a complex work portraying members of the Security Council and 65 people representing the nations of the world.

Researched and developed to the final drawing stage, Rockwell’s United Nations never actually made it to canvas, but his desire to reach out to a global community and emphasize the commonality of mankind found its forum in the 1961 painting, Golden Rule, which appeared on the cover of The Saturday Evening Post and later as a large mosaic at the United Nations.

“This unique exhibition bridges the local and the global,” adds United Nations Deputy Secretary-General, Jan Eliasson. “Spotlighting an iconic artist who showed the ideals of home, while also beckoning us to the dreams and aspirations of the world at large.”

“Norman Rockwell was a keen observer of people and believed that every person mattered. As he matured as an artist, his subject matter frequently addressed issues of social change and our common humanity,” says Norman Rockwell Museum Director/CEO Laurie Norton Moffatt.

“We are honored to be partnering with the United Nations, at the invitation of Deputy Secretary-General Jan Eliasson, for this special exhibition commemorating the 70th anniversary of the organization’s peacekeeping efforts. Eliasson believes that Norman Rockwell’s artwork captures the humanitarian aims of the United Nations and embodies ideals for all people. Indeed, his interest in portraying international figures, America’s civil rights movement, the early work of the Peace Corps and the United Nations, and The Four Freedoms (soon to celebrate their own 75th anniversary), informed and helped shape civil society in America. We are proud to be able to share this inspiring and heartfelt display of his work, from our permanent collection. 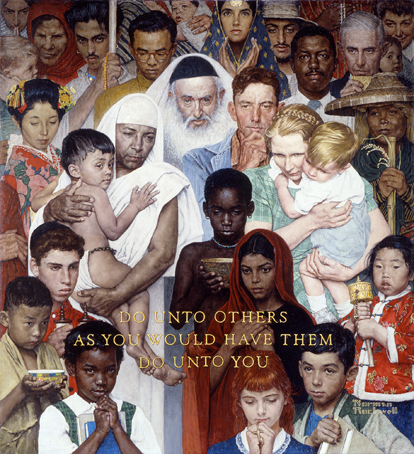 Organized by Norman Rockwell Museum with support from the United Nations Foundation, We the Peoples features 33 original artworks, and marks the first showing the artist’s rare 1953 drawing, United Nations, outside of Stockbridge. Along with 1961’s Golden Rule painting, the exhibition will feature idea sketches, color studies, and notes for both artworks.

A selection of reference photos taken by the artist at the UN, featuring several of its ambassadors and members of its Security Council, will also be displayed, along with photographs of local models, taken in his Arlington, Vermont studio in 1952, as reference for the artwork.

Other highlights from the exhibition include a series of travel paintings and drawings created by Norman Rockwell in the early 1960s, featuring spontaneous oil portraits of citizens from India and Russia; 1955 drawings from the artist’s sketchbook reflect his observations during a worldwide trip for Pan American Airlines’ advertising campaign; and two paintings of the Peace Corps in India, created for Look magazine in 1966, showcase Rockwell’s idealism and hopeful outlook for the future; digital reproductions of some of his most iconic Civil Rights era paintings also will be included. Additional archival documents and video will support the exhibition.

“Norman Rockwell’s United Nations reminds us that the people of the world look to their leaders to work together at the UN to create a better world for all,” said Kathy Calvin, the United Nations Foundation’s President and CEO.   “For the past 70 years, the UN has worked with governments around the world to help build peace, human rights, and prosperity in a rapidly changing and complicated world, and it will continue to do so for the next 70. People around the world hope for a future in which we can end extreme poverty and inequality, and combat the impacts of climate change — the UN is working with governments to establish global goals and a plan to make them a reality. In this crucial anniversary year, the UN Foundation is proud to support an exhibit that reminds us just how important the role of the UN is to all of us.”

Also on display, the towering glass mosaic of Rockwell’s Golden Rule was presented to the United Nations in 1985 as a 40th anniversary gift on behalf of the United States by then First Lady Nancy Reagan, made possible by the Thanks-Giving Square Foundation. In 2014, the newly restored mosaic was rededicated by the Permanent Mission of the United States by Assistant Deputy Secretary General Jan Eliasson, whose vision was the impetus for this exhibition.

Related educational programs will be presented during the summer at the United Nations Headquarters and at the Norman Rockwell Museum in Stockbridge. Visit www.un.org and www.nrm.org/un for more details.

About the United Nations

The United Nations is an international organization founded in 1945. Currently, it is made up of 193 Member States. Its mission and work are guided by the purposes and principles contained in its founding Charter, established on June 26, 1941.

Due to the powers vested in its Charter and its unique international character, the United Nations can take action on the issues confronting humanity in the 21st century, such as peace and security, climate change, sustainable development, human rights, disarmament, terrorism, humanitarian and health emergencies, gender equality, governance, food production, and more.

The UN also provides a forum for its members to express their views in the General Assembly, the Security Council, the Economic and Social Council, and other bodies and committees. By enabling dialogue between its members, and by hosting negotiations, the Organization has become a mechanism for governments to find areas of agreement and solve problems together.