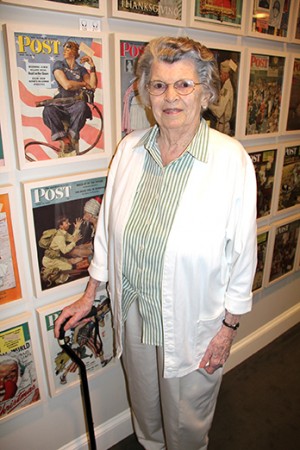 Norman Rockwell Museum is saddened to learn of the passing of Mary Doyle Keefe, the original model for Norman Rockwell’s iconic “Rosie The Riveter” painting, at age 92.

Ms. Keefe was a neighbor of Rockwell’s during his years in Arlington, Vermont, when he called on the 19-year old telephone operator to pose for an illustration that would appear on the cover of “The Saturday Evening Post” on May 29, 1943. Although Keefe was the model, Rockwell modeled the figure on Michelangelo’s depiction of the Prophet Isaac from the Sistine Chapel. The artist later apologized for making her arms and shoulders much larger than they were in-person, but Keefe seemed to take it all in stride. Her image became a symbol for millions of American women who went to work during World War II. The original oil on canvas painting is part of the permanent collection at the Crystal Bridges Museum of American Art.

Keefe was a good friend to Norman Rockwell Museum, where she shared her experience and memories of posing for Rockwell on several occasions (most recently, at our Models Reunion in July 2013). Always modest and gracious with her time, she willingly posed for visitors’ photos and signed autographs. Recently, her granddaughter went on to intern here at the Museum.

We send our condolences to Mary’s family and friends.

“One-time Nashua resident who posed as ‘Rosie the Riveter’ dies,” The Nashua Telegraph (subscription only), April 24, 2015