What People are Saying about Roz Chast: Cartoon Memoirs

“Just like at a good movie, I laughed, I cried, I got hungry. We left satisfied…”

“Roz Chast came out drawing. She admits as much.”

“If anyone could pull laughs from the burden of caring for aging parents, it would be Roz Chast”

In her first memoir, long-time New Yorker cartoonist Roz Chast brings her signature wit to the topic of aging parents. Spanning the last several years of their lives and told through four-color cartoons, family photos, and documents, and a narrative as rife with laughs as it is with tears, Chast’s memoir is both comfort and comic relief for anyone experiencing the life-altering loss of elderly parents. When it came to her elderly mother and father, Roz held to the practices of denial, avoidance, and distraction. But when Elizabeth Chast climbed a ladder to locate an old souvenir from the “crazy closet,” with predictable results, the tools that had served Roz well through her parents’ seventies, eighties, and into their early nineties could no longer be deployed.

While the particulars are Chast-ian in their idiosyncrasies, focusing on an anxious father who had relied heavily on his wife for stability as he slipped into dementia, and a former assistant principal mother whose overbearing personality had sidelined the artist for decades, the themes are universal: adult children accepting a parental role; aging and unstable parents leaving a family home to live within the confines of an institution; dealing with uncomfortable physical intimacies; managing logistics; and hiring strangers to provide the most personal care. An amazing portrait of two lives at their end and an only child coping as best she can, Something More Pleasant will show the full range of Roz Chast’s talent as cartoonist and storyteller. The exhibition will also feature additional artworks representing the breadth of the artist’s career, including her legendary art for The New Yorker, children’s picture books, intricately-painted eggs, and hand-made storytelling rugs. 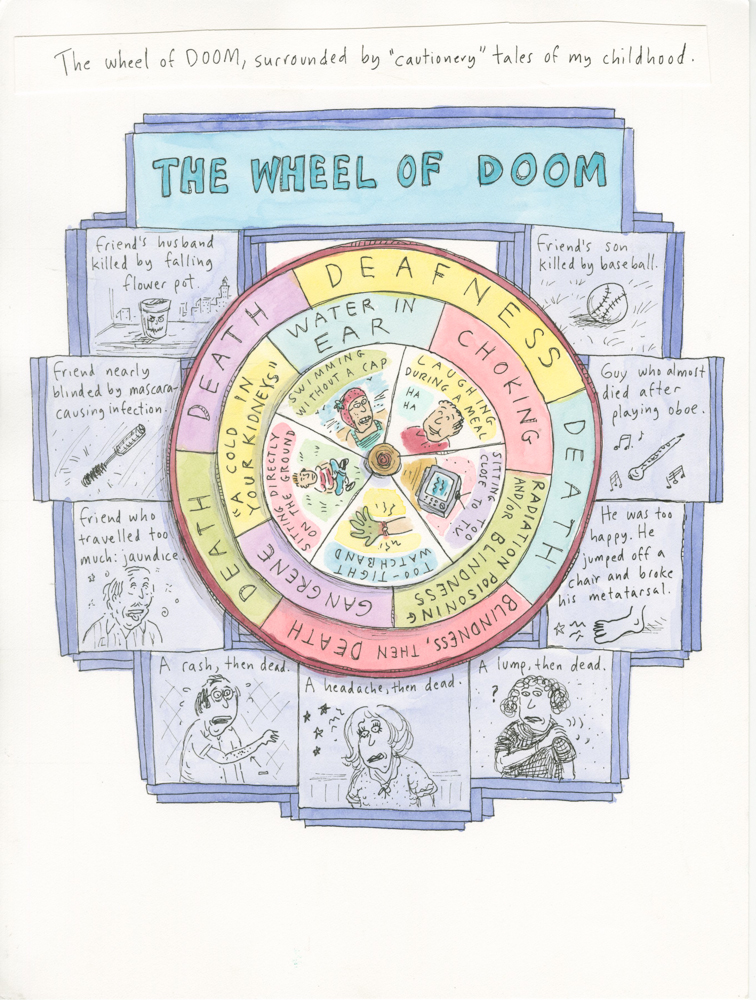 Roz Chast,Wheel of Doom, 2014. Illustration for
Can’t We Talk About Something More Pleasant?
(Bloomsbury, USA, New York). Watercolor and ink on paper.
Collection of the artist.

Born in Brooklyn, New York, Roz Chast is the only child of two educators who subscribed to The New Yorker and inspired her art and world view – her strong-willed mother, Elizabeth, and her gentle, worrywart father, George, who were in the same fifth grade class. Chast studied painting and printmaking at Kirkland College in upstate New York, and received her Bachelor of Fine Arts degree from Rhode Island School of Design, but did not feel free to explore car- tooning fully until after graduation. Her earliest drawings were published in Christopher Street,The Village Voice, and later, National Lampoon.

In 1978, The New Yorker accepted her first submission, a small collection of “Little Things” that stood apart from the cartoons generally associated with the magazine. As a young artist, she gathered a collection of original drawings, “put them in a portfolio, and dropped it off with my little card. I came back to pick them up the next week and there was a note from the cartoon editor [Lee Lorenz], which completely floored me. He said to start coming back every week, so I did.” Since then, more than eight hundred of Chast’s artworks have been published by The New Yorker. Though she covers all manner of subjects in her art, she particularly enjoys drawing interior scenes, replete with elaborate wallpapers and furnishings – a conspiracy of inanimate objects” reminiscent of her early life. Chast’s cartoons have also appeared in Scientific American, the Harvard Business Review, Redbook, and Mother Jones, among others.

When I’m drawing, I’m thinking “what do I think is funny, what’s making me laugh, what’s getting to me?” 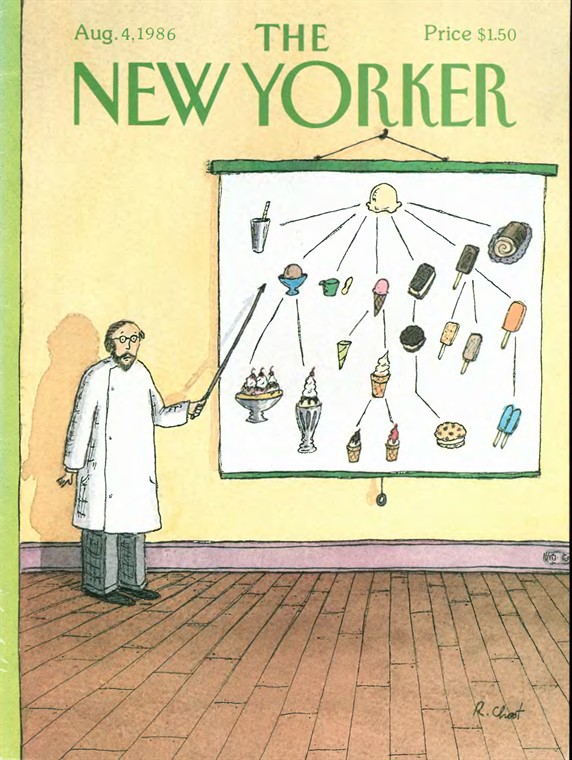 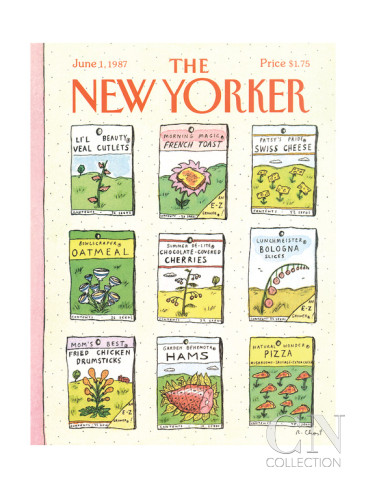 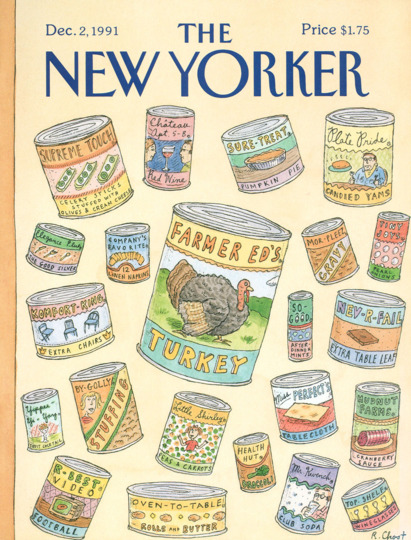 Thanksgiving (In a Can) 1991;
Cover illustration for The New Yorker, December 2, 1991;
Watercolor and ink on paper; Courtesy of Roz Chast and Danese/Corey, New York 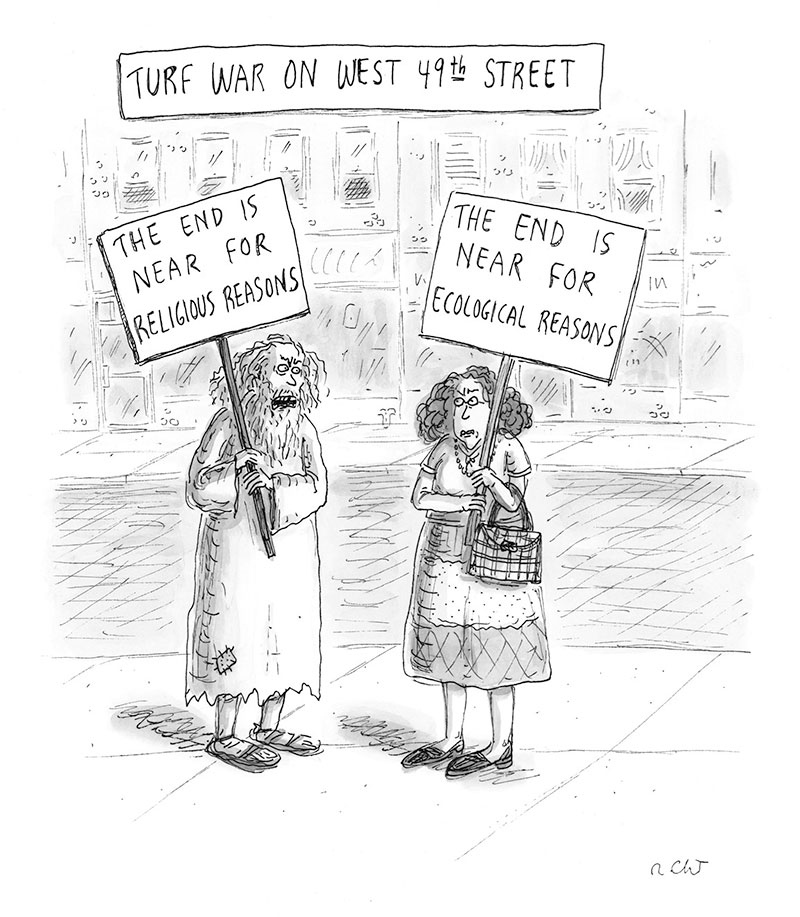