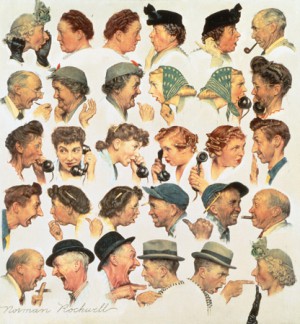 Stockbridge, MA, December 20, 2013—”The Gossips,” one of Norman Rockwell’s most popular paintings, has returned to Norman Rockwell Museum to be displayed for a limited time. Created by Rockwell for the March 6, 1948 cover of “The Saturday Evening Post,” the original painting was previously on loan to the Museum for over two decades before being sold during a record-setting auction of the artist’s work at Sotheby’s in December of this year—the loan is made possible through the generosity of the artwork’s new owner.

“We are so happy to welcome back ‘The Gossips’,” notes Norman Rockwell Museum Director/CEO Laurie Norton Moffatt. “The Museum is extremely grateful to the painting’s new owner for allowing us to once again share this beloved work with the public. We look forward to displaying the painting over the next few months, along with other special loans and our permanent collection of Norman Rockwell artwork.”

In addition to “The Gossips,” other recent Rockwell loans to the Museum include the “Saturday Evening Post” cover paintings: “Merrie Christmas (aka Man with Christmas Goose)” (1938), created for the December 17, 1938 cover and featuring the Charles Dickens character, Samuel Pickwick preparing for the holidays; “Crestwood Commuter Station” (1946), which appeared on the November 16, 1946 cover of “The Post,” and featured the hectic commuter rush at a railroad station in Crestwood, New York; and “Boy Making Football Tackle” (1925), which graced the magazine’s November 21, 1925 cover—all paintings are courtesy of private collections.

Painted in 1948, Rockwell had the idea for “The Gossips” 20 years earlier but couldn’t quite get the ending until he thought to picture himself as the subject of the gossips’ circle; he used his neighbors in Arlington, Vermont as the other figures in the painting. Thousands of letters were sent to “The Saturday Evening Post” asking what the gossip was they were passing along, but an answer was never given. In an interview in December of 1948, Rockwell remembered that the woman who posed for the first lady in the picture, the one who had started the gossip, was still a little upset at her portrayal. Not all of his subjects were critical: one model told a reporter, “It’s more fun posing for him than going to the movies. Norman keeps you in stitches with his funny stories.”