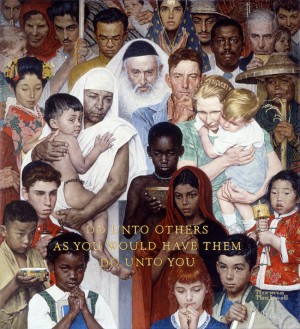 This week the United Nations rededicated a large mosaic of Norman Rockwell’s iconic 1961 illustration, Golden Rule, which hangs in their New York City Headquarters. The work—originally presented to the UN in 1985 as a gift on behalf of the United States by then First Lady Nancy Reagan—was restored by Williamstown Art Conservation Center, which over the years has repaired numerous objects from Norman Rockwell Museum’s collection as well (including Rockwell’s 1953 United Nations drawing, which was the artist’s earliest conceptions for Golden Rule). Here is a little more background on both artworks, currently on view and part of the collection of Norman Rockwell Museum.

Conceived in 1952 and executed in 1953, this drawing was inspired by the United Nation’s humanitarian mission. Though it was carefully researched and developed, Rockwell’s idea never made it to canvas. He said he didn’t quite know why he grew tired of the piece—perhaps it was too ambitious. At the height of the Cold War and two years into the Korean War, his concept was to picture the United Nations as the world’s hope for the future—he included sixty-five people representing  the world’s nations, “waiting for the delegates to straighten out the world, so that they might live in peace and without fear.” In the end Rockwell abandoned the illustration, saying that it seemed empty and pretentious, although he would reference it again many years later.

In the 1960s, the mood of the country was changing, and Norman Rockwell’s opportunity to be rid of the art intelligentsia’s claim that he was old-fashioned was on the horizon. His 1961 Golden Rule was a precursor to the type of subject he would soon illustrate. A group of people of different religions, races and ethnicity served as the backdrop for the inscription “Do Unto Other as You Would Have Them Do Unto You.” Rockwell was a compassionate and liberal man, and this simple phrase reflected his philosophy. Having traveled all his life and been welcomed wherever he went, Rockwell felt like a citizen of the world, and his politics reflected that value system.

I’d been reading up on comparative religion. The thing is that all major religions have the Golden Rule in Common. “Do unto others as you would have them do unto you.” Not always the same words but the same meaning.–Norman Rockwell, The Norman Rockwell Album.

From photographs he’d taken on his 1955 round-the-world Pam Am trip, Rockwell referenced native costumes and accessories and how they were worn. He picked up a few costumes and devised some from ordinary objects in his studio, such as using a lampshade as a fez. Many of Rockwell’s models were local exchange students and visitors. In a 1961 interview, indicating the man wearing a wide brimmed hat in the upper right corner, Rockwell said, “He’s part Brazilian, part Hungarian, I think. Then there is Choi, a Korean. He’s a student at Ohio State University. Here is a Japanese student at Bennington College and here is a Jewish student. He was taking summer school courses at the Indian Hill Museum School.” Pointing to the rabbi, he continued, “He’s the retired postmaster of Stockbridge. He made a pretty good rabbi, in real life, a devout Catholic. I got all my Middle East faces from Abdalla who runs the Elm Street market, just one block from my house.” Some of the models used were also from Rockwell’s earlier illustration, United Nations.

See the originals: Golden Rule and United Nations are currently on view at Norman Rockwell Museum.

View the restoration of Rockwell’s United Nations painting below: