Skip to content
Heroes and Villains: The Comic Book Art of Alex Ross 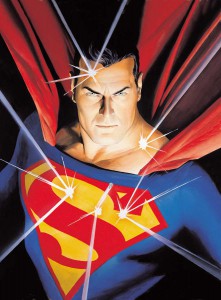 One of the greatest artists in the field of comic books, Alex Ross has revitalized classic superheroes into works of fine art with his brilliant use of watercolor. Just as Andy Warhol elevated soup can labels into multi-million dollar artworks, Ross has transformed comic books. By building on the foundation of the great artists who came before him― Jack Kirby, Steve Ditko, John Romita, Neal Adams, George Perez, and others―Ross’ paintings have revolutionized the comic book industry and transcended the newsstand origins of his profession.

At just three years of age, Ross was drawing TV commercials from memory. By the age of 13 he was scripting and drawing original comic books. Ten years later, Ross was hired by Marvel Comics to illustrate Marvel’s central characters in the comic book event, Marvels (1994). His impact on the comic book industry became so powerful that his hugely successful comic book series, Kingdom Come (1996), marks the close of the “Dark Age” of comic books, in which pessimism, violence, and gritty stories ruled, into the birth of the “Modern Age” of optimism and strong superheroes. Ross would go on to win the Comic Buyer’s Guide Award for Favorite Painter so many times the award was retired.

Paintings and sketches from his early career from projects like Marvels and Kingdom Come will be included, as well as works from more recent projects, such as Justice, Flash Gordon, and Green Hornet. Showcasing the heavy influence of American illustration and Pop Art on Alex Ross, works by Andy Warhol, Norman Rockwell, Andrew Loomis, and JC Leyendecker will be included. Works by Lynette Ross, the artist’s mother and an artistic inspiration, will be featured, as will Myths prints created by Andy Warhol, featuring many of the subjects of Alex Ross paintings, including Superman, Uncle Sam, and the Wicked Witch of the West from The Wizard of Oz. Since Warhol was a huge comic book fan, we will also have a selection of comic books and related paraphernalia collected by Warhol throughout his life.

Heroes & Villains: The Comic Book Art of Alex Ross has been organized by The Andy Warhol Museum, one of the four Carnegie Museums of Pittsburgh.

FacebookTwitterLinkedInPinterestEmail
This website uses cookies to improve your experience. We'll assume you're ok with this, but you can opt-out if you wish. <a class="cli_settings_butto