Stockbridge, MA, October 15, 2012— On January 6, 1941, President Franklin Delano Roosevelt delivered a speech before Congress, articulating his vision for a postwar world founded on four basic human freedoms: freedom of speech, freedom of religion, freedom from want, and freedom from fear. 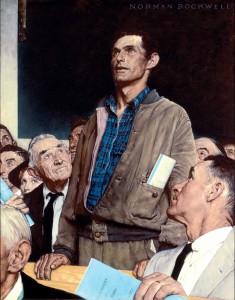 The groundbreaking speech also caught the attention of Norman Rockwell, who responded to the government’s call to artists to contribute to the ongoing war effort. Rockwell began working on a series of illustrations depicting each of the freedoms President Roosevelt had outlined in his speech. Subsequently, Rockwell’s “Four Freedoms” paintings would rally Americans to purchase 133 million dollars in war bonds and stamps, following their publication in “The Saturday Evening Post” and inclusion in a national tour visited by millions. Today Rockwell’s iconic paintings are a cornerstone of the permanent collection of Norman Rockwell Museum, displayed in their own gallery designed by architect Robert A. M. Stern, which offers space for silent contemplation of the artist’s own interpretations of Roosevelt’s lofty vision.

On Wednesday, October 24 (United Nations Day), another tribute, The Franklin D. Roosevelt Four Freedoms Park, will open on Roosevelt Island in New York City, as a lasting memorial to the President and his ideals that inspired a nation.

The idea for the park began in the late 1960s, when New York City Mayor John Lindsay proposed the idea of transforming Welfare Island into an active residential community. The “New York Times” supported the idea, and suggested renaming the island in President Roosevelt’s honor, remarking, “It has long seemed to us that an ideal place for a memorial to FDR would be on Welfare Island… it would face the sea he loved, the Atlantic he bridged, the Europe he helped to save, the United Nations he inspired.” Work on the memorial began in 1973, with the appointment of the late Louis Kahn as its architect. The project was then delayed as the city approached bankruptcy during the later part of the decade. Following much patience and determination, construction on the park resumed in March 2010, in time to celebrate the 70th anniversary of Roosevelt’s “Four Freedoms” speech.

Norman Rockwell Museum Director/CEO Laurie Norton Moffatt will attend the dedication as a special invited guest and preview the park on Wednesday, October 17, where President William Jefferson Clinton is scheduled to speak. “It is a tremendous honor to represent Norman Rockwell Museum and Norman Rockwell’s ‘Four Freedoms’ at this historic moment celebrating our nation’s founding tenets,” notes Ms. Norton Moffatt. “Norman Rockwell created the visual icons that interpreted President Roosevelt’s articulation of our nation’s ideals. Freedom is known all over the world through Rockwell’s images, which preside in the central gallery of his museum in Stockbridge, Massachusetts.”

Located on a triangular four-acre plot on the southern tip of Roosevelt Island in the East River of New York City, the Franklin D. Roosevelt Four Freedoms Park will include walkways lined with trees, a statute of Roosevelt, and a granite monument symbolizing the “Four Freedoms” outlined in the President’s historic address. The park’s construction is being managed by the FDR Four Freedoms Park LLC, led by the Chair of its Board of Directors, former Ambassador William J. vanden Heuvel; its President and CEO, Sally Minard; and its Executive Director, Gina Pollara. Learn more about the FDR Four Freedoms Park at http://www.fdrfourfreedomspark.org.

Norman Rockwell Museum has several programs bringing the concepts of the “Four Freedoms” to the world. Museum Director/CEO Laurie Norton Moffatt has represented the Museum as a member of the American delegation with the Roosevelt Institute at the International Four Freedoms Awards in the Netherlands; she has also juried an art exhibition inspired by Norman Rockwell’s “Four Freedoms,” and presented talks on the “Four Freedoms” and the founding of the Peace Corps in Addis Ababa, Ethiopia in 2011, at the invitation of the U.S. State Department; and has served on President Barack Obama’s Bilateral Commission to Russia to engender greater cultural discourse, and identify new partnerships and initiatives.

The Museum also shares Rockwell’s “Four Freedoms” images through poster exhibitions at U.S. Embassies and Cultural Centers through the U.S. Department of State. The “Four Freedoms” images continue to travel across the nation in the Museum’s traveling exhibition, “American Chronicles: The Art of Norman Rockwell,” which combined with an earlier traveling exhibition, “Pictures for the American People,” have been seen by more than five million people in 20 cities.

In 2010, Norman Rockwell Museum inaugurated the Four Freedoms Forums, an ongoing series of town hall meetings held at the Museum, that engage the community in civil conversation about these universal human rights and the complicated issues of our time. These initiatives help bring Rockwell, his ideals and values to the world.

The Museum is proud to pay tribute to the enduring legacy of these important human values with a special gallery talk about “The Four Freedoms” on Wednesday, October 17, starting at 2:30 p.m. Norman Rockwell Museum’s Curator of Education Tom Daly will discuss these seminal works in celebration of the unveiling of the FDR Four Freedoms Park in New York. The talk is free with Museum admission; members free.

The Four Freedoms Forums are a signature program of Norman Rockwell Museum, offered each winter and spring in the main galleries as a series of evening meetings that bring people together for guided conversation about current compelling issues of their community. The Forums are the Museum’s response to an increasing polarization in discussions about flash-point issues, often fueled by deep skepticism, misinformation, or basic lack of understanding of complex problems.

Open to the public, the Forums are based on the traditional New England town hall meeting and honor Norman Rockwell’s iconic “Four Freedoms” paintings (1943) – particularly “Freedom of Speech.” The Four Freedoms Forums introduce a different topic at each meeting, presented by invited experts who share possible solutions from different viewpoints, while a moderator lays ground rules for respectful listening and civil discourse.

The Four Freedoms Forums were conceived by Museum Director/CEO Laurie Norton Moffat and developed with the Chief Curator and Education Curator, along with a volunteer Community Council of 20 people who care deeply about their community and the nation. Representing various professions and spanning our region’s socio-economic, political, and cultural spectrum, this diverse group brings perspectives and suggestions to the Museum, and helps identify topics, speakers, and moderators.

Now in their third year, the Four Freedoms Forums provide a unique opportunity for people to stand up and have a voice about a topic under discussion, and to hear other perspectives by attendees and informed individuals in the field. Advisors to the Museum’s “Four Freedoms” programs include noted scholars Bruce Cole, former NEH Chairman and Norman Rockwell Museum Trustee; James MacGregor Burns, presidential biographer (Pulitzer Prize/National Book Award recipient) and Professor Emeritus at Williams College; and William van den Heuvel, Chairman of the Franklin and Eleanor Roosevelt Institute in Hyde Park, New York; and member of the Foreign Relations Council.