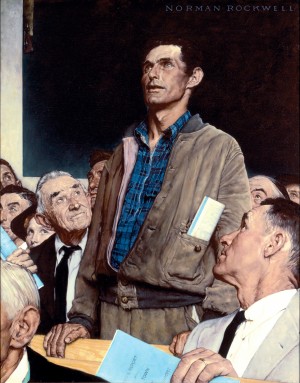 In his January 1941 address to Congress, President Franklin Delano Roosevelt articulated his vision for a postwar world founded on four basic human freedoms: freedom of speech, freedom of worship, freedom from want, and freedom from fear. In the spring of 1942, Norman Rockwell was working on a piece commissioned by the Ordnance Department of the U.S. Army, a painting of a machine gunner in need of ammunition. Posters of the gunner, titled Let’s Give Him Enough and On Time, were distributed to ordnance plants throughout the country to encourage production. But Rockwell wanted to do more for the war effort and decided he would illustrate Roosevelt’s four freedoms. Finding new ideas for paintings never came easily, but this was a greater challenge. “It was so darned high-blown,” Rockwell said, “Somehow I just couldn’t get my mind around it.” While mulling it over, Rockwell, by chance, attended a town meeting where one man rose among his neighbors and voiced an unpopular view. That night Rockwell awoke with the realization that he could paint the freedoms best from the perspective of his own hometown experiences using everyday, simple scenes such as his own town meeting. Rockwell made some rough sketches and, accompanied by fellow Post cover artist Mead Schaeffer, went to Washington to propose his poster idea. 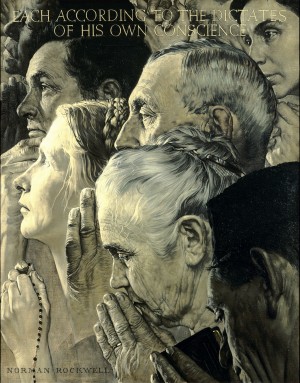 The timing was wrong. The Ordnance Department didn’t have the resources for another commission. On his way back to Vermont, Rockwell stopped at Curtis Publishing Company, publisher of The Saturday Evening Post, and showed his sketches to editor Ben Hibbs. Hibbs immediately made plans to use the illustrations in the Post. Rockwell was given permission to interrupt his work for the magazine—typically one cover per month—for three months. But Rockwell “got a bad case of stage fright,” and it was two and a half months before he even began the project. “It was a job that should have been tackled by Michelangelo,” he said in a New Yorker interview three years later.

The paintings were a phenomenal success. After their publication, the Post received 25,000 requests for reprints. In May 1943, representatives from the Post and the U.S. Department of the Treasury announced a joint campaign to sell war bonds and stamps. They would send the Four Freedoms paintings along with 1,000 original cartoons and paintings by other illustrators and original manuscripts from The Saturday Evening Post on a national tour.

Traveling to sixteen cities, the exhibition was visited by more than a million people who purchased 133 million dollars in war bonds and stamps. Bonds were sold in denominations of $25, $100, and $1,000, and each person who purchased one received a set of prints of the four paintings. In addition, the Office of War Information printed four million sets of posters of the paintings. Each was printed with the words “Buy War Bonds.” They were distributed in United States schools and institutions, and overseas.

The Four Freedoms are now part of the permanent collection of Norman Rockwell Museum and reside in their own specially designed gallery space, inviting visitors to reflect on their inspiring message. 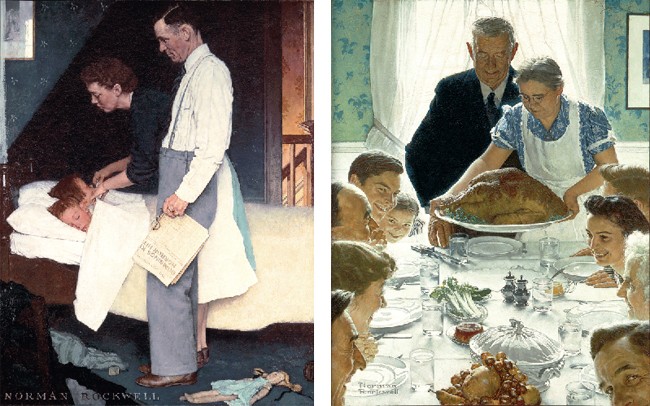 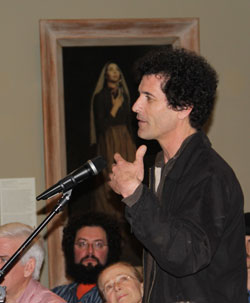 This series of Town Hall conversations inspired by Norman Rockwell’s Four Freedoms paintings will explore aspects of our democracy in a rapidly changing and increasingly global world. Noted commentators will offer observations and inspire community discourse, with a reception to follow.