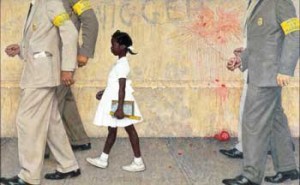 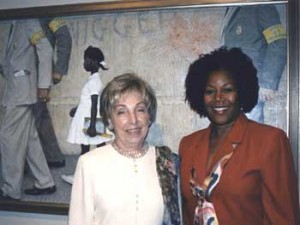 November 14, 2010 marks the 50th anniversary of six-year-old Ruby Bridges’ history-changing walk integrating the William Franz Public School in New Orleans; the moment took place six years after the 1954 United States Supreme Court Brown v. Board of Education ruling declared that state laws establishing separate public schools for black and white students were unconstitutional, and represented a definite victory for the American Civil Rights Movement. Among those Americans to take note of the event was artist Norman Rockwell, a longtime supporter of the goals of equality and tolerance. In his early career, editorial policies governed the placement of minorities in his illustrations (restricting them to service industry positions only), however in 1963 Rockwell confronted the issue of prejudice head-on with one of his most powerful paintings—”The Problem We All Live With.” Inspired by the story of Ruby Bridges and school integration, the image featured a young African-American girl being escorted to school amidst signs of protest and fearful ignorance. The painting ushered in a new era in Rockwell’s career, and remains an important national symbol of the struggle for racial equality.

“I was about 18 or 19 years old the first time that I actually saw it,” says Ruby Bridges Hall, who now serves on the board of Norman Rockwell Museum, which owns the original painting. “It confirmed what I had been thinking all along—that this was very important and you did this, and it should be talked about… At that point in time that’s what the country was going through, and here was a man who had been doing lots of work—painting family images—and all of the sudden decided this is what I am going to do… it’s wrong and I’m going to say that it’s wrong.”

The illustration appeared in the January 14, 1964 issue of “Look” magazine, and earned Rockwell letters of both praise and criticism from readers unused to such direct social commentary from the illustrator. Rockwell would revisit the theme of civil rights in several other illustrations from the period, and in 1970 received the Million Dollar Club Award from The National Association for the Advancement of Colored People (NAACP), for having contributed $1000 to the organization.

“The Problem We All Live With” was the first painting purchased by Norman Rockwell Museum in 1975, and is currently on view in the national touring exhibition “American Chronicles: The Art of Norman Rockwell.” An intimate installation commemorating Ruby Bridges’ historic walk will be exhibited at the Museum starting Saturday, November 13, and will include studies, photographic references, and the original “Look” magazine tear sheet featuring Rockwell’s iconic image. On Sunday, November 14, curator Corry Kanzenberg will give a one hour talk about the painting, starting at 11:30 a.m.

Ms. Bridges Hall, who founded The Ruby Bridges Foundation in 1999 to promote the values of tolerance, respect, and appreciation of all differences, commends Rockwell for having “enough courage to step up to the plate and say I’m going to make a statement, and he did it in a very powerful way.” Learn more about the Ruby Bridges Foundation a https://rubybridgesasingh.weebly.com/ruby-bridges-foundation.html.